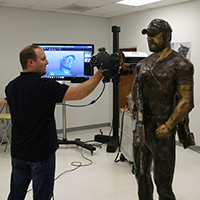 EMS recently donated effort and resources to 3D scan and 3D print a sculpture of Navy Seal Chris Kyle, who was killed helping other veterans. Chris Kyle was a United States Navy SEAL sniper who has been credited by the U.S. Navy with more kills as a sniper than any other service member. Kyle served four tours in the Iraq War and was awarded multiple commendations for acts of heroism and meritorious service in combat, including a Silver Star Medal, four Bronze Star Medals, and a Navy and Marine Corps Achievement Medal. Three years after his 2009 honorable discharge from the U.S. Navy, Kyle published his bestselling autobiography “American Sniper”. On February 2, 2013, Kyle and a friend were murdered by Eddie Ray Routh, a former Marine with PTSD, at a shooting range near Chalk Mountain, Texas.

Patriot master sculptor Greg Marra created a life-size sculpture to honor Kyle, and also raise money to help U.S. veterans through the sale of bronze miniatures of the fallen hero.

The challenge of creating a master pattern for bronze miniatures from a highly detailed life-size original sculpture was no minor task. Digital CAD files didn’t exist and traditional manual measurements for such a highly irregular, custom shape would take months, cost a lot of money, and still not produce a very accurate result.

To capture the 3D CAD file data needed, EMS used a high resolution Creaform MetraSCAN to 3D scan the sculpture. The MetraSCAN’s camera system optically tracks the handheld 3D scanner head, which enables large objects to be 3D scanned very accurately and very quickly. With the Creaform MetraSCAN, the EMS team was able to capture all the surface measurement details in high resolution. As importantly, they were able to do it in less than a day, and without any damage to the sculpture.

From there, EMS compiled the 3D scan data and created the digital CAD files. EMS then used the digital models to 3D print the master pattern on a 3D Systems ProJet 7000 SLA 3D Printer. Among the different 3D printing technologies available, SLA 3D printing offers the highest resolution and accuracy for a durable scaled model and master pattern.

The SLA master pattern was used to create bronze miniatures of the Chris Kyle memorial sculpture that were then sold to raise money to help US veterans.

Founded in 2001, EMS, Inc. is a leading single source provider of 3D Scanning and 3D Printing solutions to customers across a range of industries including aerospace, automotive, military, consumer products, medical and art. With over 15,000 projects completed and hundreds of systems sold, EMS specializes in helping clients streamline product development, inspection and reverse engineering through advanced 3D technology. EMS is headquartered in Tampa with regional offices in Detroit and Atlanta.